Wheatley is one of the non-playable characters in LEGO Dimensions, from the Portal 2 franchise.

Wheatley was designed to be an "Intelligence Dampening Sphere" (or, as GLaDOS puts it, "the dumbest moron who ever lived"), one of the cores attached to GLaDOS; his main purpose was "generating an endless stream of terrible ideas" as a means of delaying or stopping GLaDOS' unpredictable actions on Aperture Science Enrichment Center. For unknown reasons, Wheatley was later disconnected from her and given other jobs. Sometime before GLaDOS killed off the entire staff using neurotoxin in the Portal 2: Lab Rat comic, Wheatley had worked alongside staff members before he was put into storage with other cores seen at the end of Portal. Thanks to Chell's havoc on the Enrichment Center via the destruction of GLaDOS at the conclusion of Portal, Wheatley and the rest of the cores were reactivated in order to maintain the facility. Ironically, this backfired as many cores (except Wheatley and the corrupted cores seen at the end of the game) appear to have been either: killed off, gone insane, or ran low on power.

Prior to the events of Portal 2, Wheatley took charge of maintaining the Extended Relaxation Center -- which houses test subjects in long-term cryogenic stasis before and after they are put through the testing courses. However, what he has done to actually manage the entire wing remains unmentioned. It was only until many centuries later that Wheatley decided to escape the facility. To accomplish this, he attempted to gather help from any remaining test subject that managed to last centuries after running out of cryogenic supply. Luckily for him, Chell was one of them, if not the only one, that lasted. He actually planned to take control of the Aperture Science Enrichment Center, through a core transfer with GLaDOS. Chell helped him, but he changed his mind through the circumstances and became Chell's secondary nemesis. Badly for him, Chell and GLaDOS worked together to stop Wheatley's reign of stupidity and sucked him into space with a portal. He survived but got stuck in space, without any chance of rescue. While in space, he understood his mistake and rued his betrayal at Chell.

GLaD to See You

Wheatley can be seen at the end of Test Chamber 05, trying to help Batman, Gandalf the Grey and Wyldstyle escape from the testing track through a pipe in the abandoned areas of the facility, however, the pipe ended up just taking them to Test Chamber 09. Later at the end of the level, Wheatley again makes an appearance, trying to help in the oven. However, he accidentally hits the wrong button, making the fire move close to the heroes, then presses another button that drops a Keystone allowing the trio to utilize the Elemental Keystone.

After the events of Portal 2, Wheatley, who now has the power of anti-gravity, returns alongside Chell to Aperture Science through a dimensional vortex and ends up being subjected to tests by GLaDOS (who is not happy to see him when he shows up). He and Chell decide to work together to find a way out of Aperture Science. After completing various test chambers and escaping from the abandoned areas of the facility, they come face to face with GLaDOS in her chamber. Wheatley gets the idea to put the Space Core on GLaDOS's mainframe. The duo has to act quickly due to GLaDOS activating the neurotoxin, and, despite the odds, Chell makes the Core Transfer, which causes GLaDOS's head to be removed and replaced by Space Core, and GLaDOS loses control of the facility. Following her defeat Wheatley and Chell discover a room behind GLaDOS' chamber where they find a Gateway and both jump through it, leaving their fate unknown. 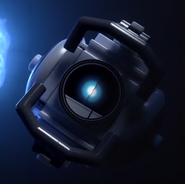 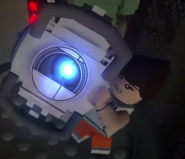 Add a photo to this gallery
Retrieved from "https://lego-dimensions.fandom.com/wiki/Wheatley?oldid=115072"
Community content is available under CC-BY-SA unless otherwise noted.