X-PO is one of the non-playable characters in LEGO Dimensions who also acts as the in-game guide.

X-PO used to accompany Lord Vortech to Foundation Prime, however, he was sent through a rift to a random dimension (falling apart in the process) when Lord Vortech no longer needed him, despite his warning that the elements were too dangerous to handle safely and the pay raise he was promised. He was seen again when the player came along.

It is later revealed that Vortech banished X-PO to Vorton but was unaware he had done so. It is unclear what happened when X-PO arrived in Vorton but we know that he broke into several pieces and then linked his A.I up to the Vorton computer on the gateway. X-PO's A.I opens rifts leading to the missing gateway pieces hoping to repair the gateway.

Upon completing the level Once Upon A Time Machine in the West, and all 5 keystones for the LEGO Gateway have been collected from the previous levels, Gandalf notices several parts of the Gateway moving and hits them with his staff, causing Batman to ask if he broke the Gateway, until Wyldstyle realises the Gateway is still working perfectly, making Batman wonder what the extra pieces are for. The Player must take off some pieces from the LEGO Gateway (physical) and build a model of X-PO. After being rebuilt, he then explains the situation to the player and enlists them to gather all of the Foundation Elements before Lord Vortech and his forces do.

“Hey there. I dug out some information you might find useful. Don't worry, you can thank me later.”

“Stuck, huh? Don't worry, you're only human. Or maybe some kind of mammal? I can't tell.”

“You look like you could use some help. Here, let me take pity on you.” 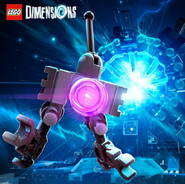 Add a photo to this gallery
Retrieved from "https://lego-dimensions.fandom.com/wiki/X-PO?oldid=113342"
Community content is available under CC-BY-SA unless otherwise noted.